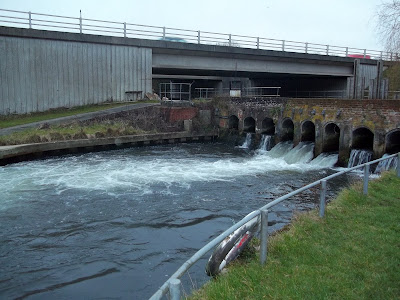 As a youngster I served my apprenticeship on the local canals and pools of Worcestershire. In time I progressed on to rivers such as the Severn, Teme and of course the Warwickshire Avon. The legendary rivers and chalk streams of the south were exactly that 'legendary'. May be I am small minded or may be I had built up some kind of mental block  that my feet would never grace the banks of such rivers and that they were purely for aristocrats and the select few.

How wrong and blinkered I was and when the chance came to me I grasped it with both hands . Keith Jobling informed me that there was a bloggers trip down to the River Itchen and said he may be able to get me on to fish . The thought that I could finally get to fish a renowned Grayling river was fantastic and when I was informed I was in, the day could not come quick enough.

I picked Dan up at 4:45am and with all the grace and finesse of a turd disappearing down a waste pipe we made our way to Hampshire. The trip went very well, and in good time we were pulling in to the fishery car park where several of the chaps were gathered. A "good morning" and some chatter was done then I made my way across to look down in to the pool (above). Straight away I was humbled by this fantastic fishery . Every metre of water I set my eye on had so much character and so much to offer it just screamed fish. 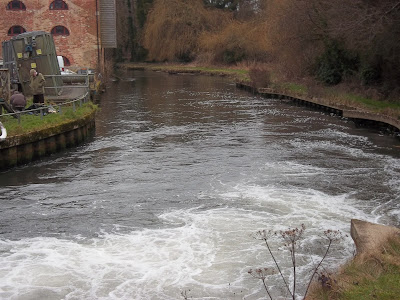 My sole ambition for the day was to catch a Grayling, size and weight were not even on the agenda, just a Grayling would do. Having read about the fishery and having a quick discussion with Keith it was decided that we would head off to the very top of the beats and fish the shallow weedy runs over the chalky gravel bottoms. The river however was carrying a tinge of colour and Jeff remarked that it may not fish well for Grayling . Roach on the other hand should be well on the feed, the sky was over cast the temperature was remarkably mild and our optimism levels were going through the roof!!!

Driving up to the top beats I stared in amazement as we passed run after run of glorious water. A day would never be enough for any angler on this river.  I decided there and then that once I had been lucky enough to nick a Grayling that I would then drop down river after the pre arranged lunch and try some of the lower river.

Keith and I parked up and then made our way up stream . We chatted excitedly as we made our way through the meadows and Keith pointed out several very nice looking runs. One of the said runs was a slow sweeping bend that had a nice piece of steady dark water on the inside and looked very fishy. 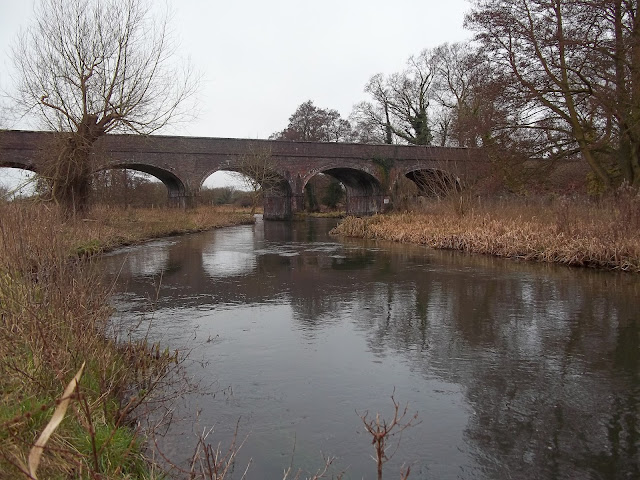 The moment came to take my first trot through and the anticipation was high to say the least. I opted for a 6 swan loafer which I fished with a bulk consisting of an olivette with a number 4 dropper shot . The choice of float may seem a little excessive but the flow on the river was very powerful and I wanted to hold back hard and trickle the hook bait through down near where I thought the fish may be .

A few trots through and the depth was found and little creases in the current were explored. A great feeling of comfort was now acquired and even with out a fish or a proper bite I felt sure that they would come . On around my sixth trot down I held back hard and the float moved gently across the current towards the near bank . The float vanished in a very positive manner and and I struck gently keeping the rod low. The feeling of a fish pulsating through 13 feet of float rod was electrifying .

Please be a Grayling !

The fight was ferocious and powerful in the flow and I came to the assumption that it must of been a trout . This was my way of settling my nerves as the fish felt good. I eventually got the rod over the top of the float and gained more line in a vain attempt to bring my prize up in the water where it would be visible. Peering down through the cloudy river I caught site of a huge Grayling idling in the flow, dorsal fully extended in sheer defiance . To say my legs buckled would be an understatement, this would be my first Grayling and it was a fish of specimen proportions . She graced the mesh of my awaiting net and I lifted victoriously although spell bound in pure disbelief as to what had just occurred . The weight that sagged my net told on my arms as I shipped the fish in to my lap for a further inspection of this majestic creature in her pure natural splendour .

"My God its huge" I declared somewhat loudly .......repeating around ten times !!!.
I staked the landing net head and pole very very securely to the bank and righted the fish pointing her up stream . For the next minute or two I did exactly what I planned to do and just sat there taking in the whole episode. The sounds and smells that surrounded my now crisp senses added to the pure enjoyment of the capture .Bliss!!

I set up the camera and placed the fish some what disrespectfully I felt, in to a carrier bag and placed her on the scales. The needle went round and passed the magic 2lb settling eventually on 2lb 2oz's .....2LBS 2OZ'S ...thank you, you gorgeous creature. 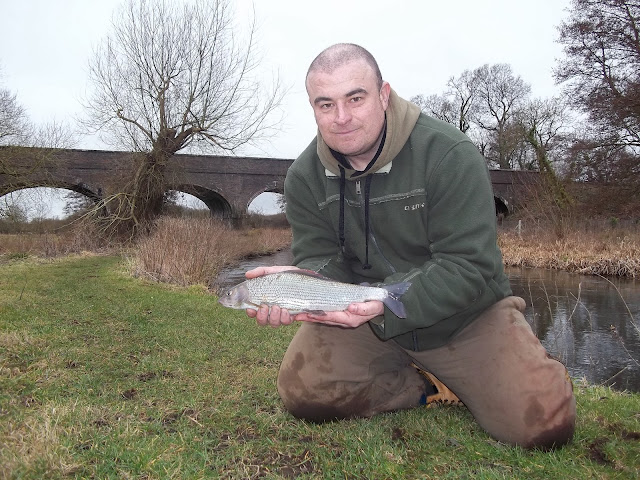 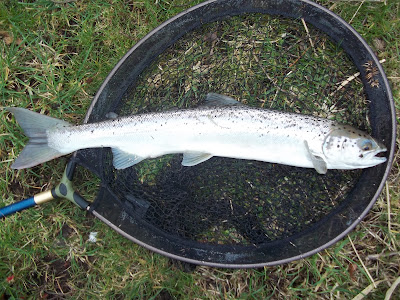 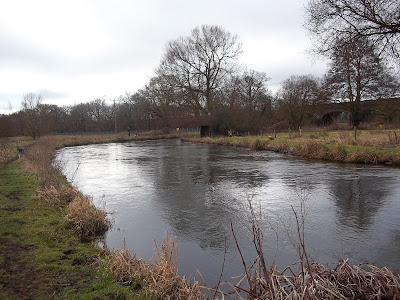 Exclaiming that he was now in turmoil as to what his next move would be he  mooched of down stream and wished me good luck .

A couple more brownies were hooked and landed and lost then I hooked something less boisterous. After a spirited  tussle I slipped the net under my second Grayling of the day .
This one went 1lb 8oz and was another lovely Itchen fish . 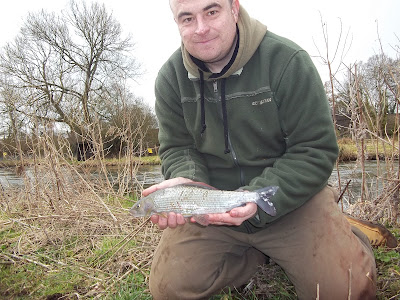 I now felt complete and that the rest of the day I would wander around the length of the lower fishery and try and bag a chub or Roach. I bid Keith a fair well and headed off to meet the chaps for lunch and a chin wag. It transpired through our chat that the river wasn't fishing very well and that not many Grayling had been caught . That was it for me now, I would definatley be trying a lot of different spots and some larger baits .

The rest of the day from lunch was a bit of a non event for me . I hooked and lost 3 very powerful and heavy feeling fish in a variety of different swims but other than 3 Salmon par my net remained dry. The light gradually faded and I packed up to watch Dan trying to out wit some roach in a side pool .

Eventually dark covered the river and we said our good byes to Sash and the other chaps before thundering our way back up to Warwickshire  . The day was wonderful but as I said earlier one day on there will never be enough and I long to return in October for my next Itchen adventure.