I awoke Sunday morning to the sound of the cat going positively ape shite and tearing around the house. He extends his claws as he runs so that he gets a better grip on the carpet to speed him merrily around my flat .

The only time he gets like this unless I'm hunting him is when its windy, and my god was it . Feeling slightly the worse for wear from the previous evenings cider escapades I decided to have a other hour in bed and see if the wind petered out. It didn't !!! In fact it got worse as I sat eating my breakfast . I decided to go out and give it a go, maybe I could find somewhere out of the wind along the river . 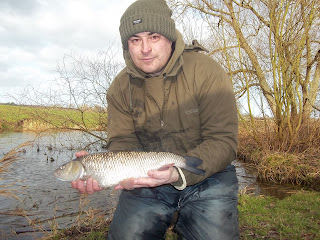 As I walked to the river around the reserve the wind was pushing and pulling me to and fro and blowing the tears form my eyes. I'm no fan of wind it complicates things and makes me feel like I am not fishing correctly.Sitting in my peg it was hitting me full in the face and lifting my rod in the rests. The 2oz tip was bouncing around and generally I was getting jarred off. I managed 3 bites and 1 chub which fought like a demon, on its first two runs it managed to convince me it was an escaped carp . However when it broke surface it was a lovely thick chub and went 4lb 4oz's.

I had another fifteen minutes in the swim but just could not settle and tip fishing was proving impossible . I opted to return home for an afternoon of football ,food and some more cider . I was more then happy with having caught a 4lb plus chub in such a short time and also my cheese paste recipe seems to be well liked by the upper Avon fish. 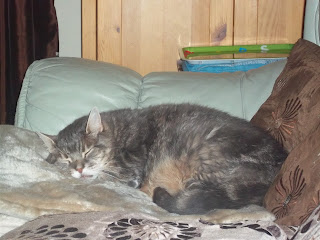 The cat slept well in the afternoon.