Well what a non starter of a year it has been for me personally. You name it, it has happened at some point this year . Angling time has been at a premium until the last couple of months as things settle down and normal service is resumed . 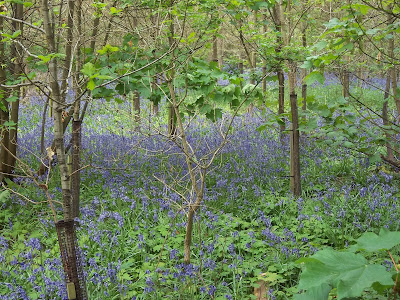 Blue bells in the woods of stoneleigh. 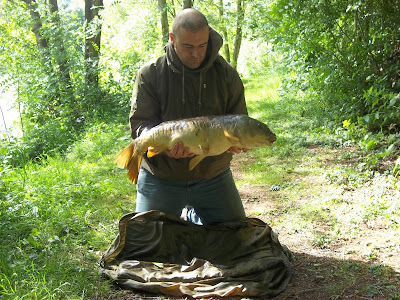 As time has been limited through the summer most of my fishing has been short carp sessions either stalking or surface fishing . As a member of the Leamington Angling Association I have access to some decent carp waters . I chose to concentrate on jubilee pools at ryton . The back pool or horseshoe as it is known is a prolific surface and margin fishing pool and it offers very good sport. 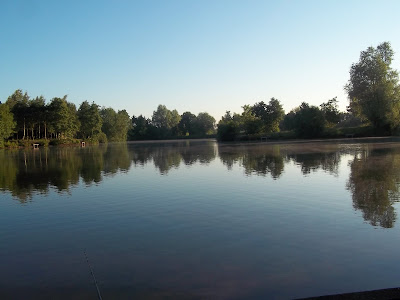 The horseshoe lake on a Summers morning.

The water clarity on this pool is extremley good and it can make for some very exciting fishing , in fact quite regularly very large carp can be seen cruising up and down the margins. Every time I fished the pool this summer I caught carp sometimes quite a few. The bait of choice this summer for me was mini marshmallows with a little betaine on them to add sweetness. The use of the sweets as bait came about after my daughter bought me some as a joke to try and and I caught five carp in a morning on them. As well as being very easy to hide a hook in they are also very easy to see at range which I find helps my confidence. 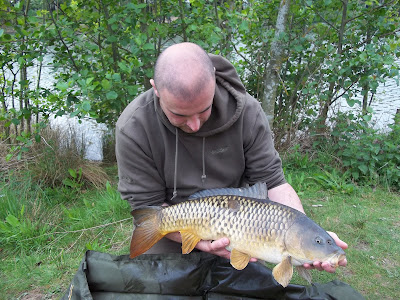 A margin caught common from the point on horseshoe.

I like the point swim on horseshoe (so does every other bugger) as the water shallows in the margins and the carp come past very frequently. I set a trap in the margin and had several carp up 13lb . The lack of rain this summer has been a real pain and water levels at the pools is down consdierably which has not helped with the margin fishing but not made it too much of a chore. 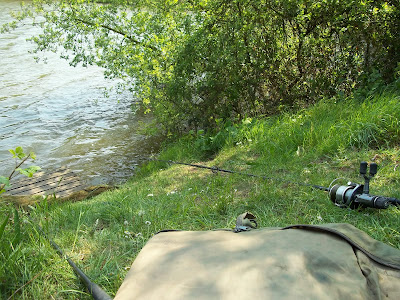 As well as my exploits on the horseshoe pool I also had a plan to set a margin trap on the Island pool. My peg of choice on this lake was number 23 in the area known as no carp bay . I had noticed some carp of a large size feeding in the margin next to the platform on this peg several times. Each time I visited the pools I would sneak up to the peg and trickle in a handful of micro pellets and a couple of prawns . One warm dull Wednesday morning I decided the time was right and went around to try my plan . As I crept around to the back of the peg I noticed three large carp slurping away at the surface next to the bush to the right of the peg . Two of the fish were very large commons and possibly pushing twenty ponds in weight. The third of the fish was a light coloured mirror. I hastily stripped the margin rig off the line and tied on a hook to free line. The bait was the afforementioned marshmallow and I crawled in to postition so that I may dap the bait on to the surface film .

No sooner had the bait touched the suface than it was engulfed and a strong fish bored of deep in to the lake . I had no idea which fish I was attached to but it felt heavy and powerful as it plodded off purposely. I was just thinking what a cunning bastard I was when the rod sprung back and the fish was gone .Ho hum I said !!!!!. On inspection the line had parted and when I checked it was quite worn along its length which I put down to the battering it had been receiving on the back pool by the tiger like small commons. 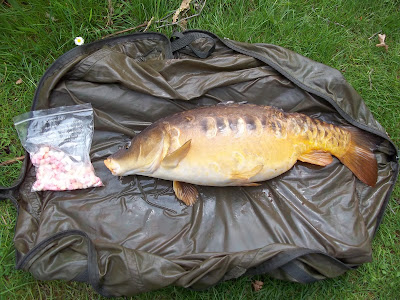 I retreated behind the bramble bush at the top of the bank and waited to see if the fish would return to the sanctuary of the overhanging bush to the right of the swim . As I waited I stripped back several metres of line and checked for damage then tied on another hook. Within minutes the carp were back and feeding on the surface again . This time just two, a common and a mirror . A mini mallow was attched and the dapping proccess repeated . This time the bait was taken by the light coloured mirror and after a spirited unrushed fight I had her on the mat.

I returned her and then decided not to push my look with the fish and to head off to the horsehoe for some surface sport. Before I left I spread a couple of handfuls of pellet and some king prawns in to the margin for another look may be later in the day. 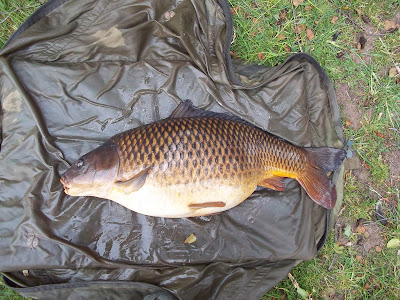 On the way back to the car I dropped back in to peg 23 and was amazed to see the margin well and trully clouded as carp were tearing up the bottom. Tails broke the surface as they fed a foot from the bank. I attached a piece of peacock quill with a float rubber and moulded a lump of tungsten putty 2 feet from the hook to keep the line down . The air crackled with anticipation as I lowered the whole contraption down in to the mucky water and crept on my knees in to a waiting position . I had hooked a large chunk of king prawn as bait and sat back to wait. After around ten minutes the quill twitched then snaked across the surfce and out of site .I set the hook and bent in to a heavy fish . Again the fight was slow and heavy and I new I had hooked a good carp . After I while she was ready for the net and when she finally gave up I slipped the net under a lovely thick dark common . The fish was one of the three I had spotted earlier that day and on the scales she went 18lb 12oz . Fantastic and what a splendid looking fish.

I left a happy man and as I drove home I looked longingly to the sky . I craved to be on the river at my beloved mill but due to the footbridge being shut I was stumped . I also prayed for rain and for barbel and chub..........