It never rains it pours!!!! 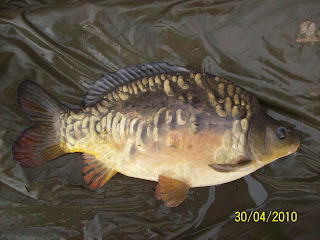 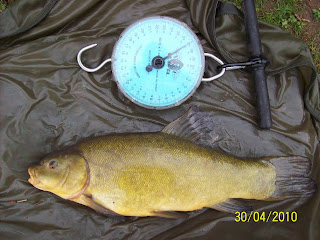 After a somewhat barren time on ryton pool I eventually returned on Friday the 30th April.

I had managed a day off work and after spending the morning shoping for clothing for a wedding I was able to spend the afternoon at the pool.I set up in morris' and the the wind was really hammering down the lake in to the front of the island.There were intermitant showers but despite all this it was very mild and the air pressure was low.

My plan was to fish the method on both rods .The rods were on single bank sticks and a couple of metres apart .One was fired across to the trees along from the disabled stage and the other punched out towards the middle of the pool to a spot i'd found.

After an hour and a half the rod in the bay was away although somewhat sheepishly .I drew the rod back and leant in to a tench of araound 2lb .Within half an hour the other rod was away and yet another tench was banked this time of 4lb 12 0z.

In the next two and a half hours the fishing was manic with me banking several more tench up to 6lb 9oz....and also my first carp of the year a stunning little mirror of 5lb 6oz.

I left a happy man.

I returned on Monday 3rd of May with a slightly wooly head from spending the day at the Upton upon Severn folk festival .I fancied a short midday session and set up in the log swim again fishing the method on both rods towards the central track of the pool .

Dan turned up and we were having a good old rattle when the left hand rod burst in to life .The take was so fast that the baitrunner spool could not cope and we looked on in awe as i scrambled to the rod that was now moving forward .I swooshed the rod back and connected with a solid fish at range it kicked back and kited to the right .Suddenly the rod wrenched back and my heart sank as i knew that the fish had parted .

Undettered and somewhat fired up i recast the rod and carried on my chat with Dan.After a while Dan said his goodbyes and wandered off .Within minutes the same rod was away again and once fish was hooked .This time the fight went on somewhat longer and my heavy duty carp rod took a substancial bend i really felt that i had connected with a good carp .

I nearly screamed as yet again the hook pulled free and the fish was away in to its watery world .
Such was the devastation of the lost fish I went home to seek some sympathy from my sarcastic Mrs and cat.
Posted by Bazal peck at 10:03