After finishing work at a reasonable time on Friday I decided to try a different stretch of my new stretch of the upper Avon . The day was very mild and for once the thermals were left in the house and  wooly hat kept in the bag. 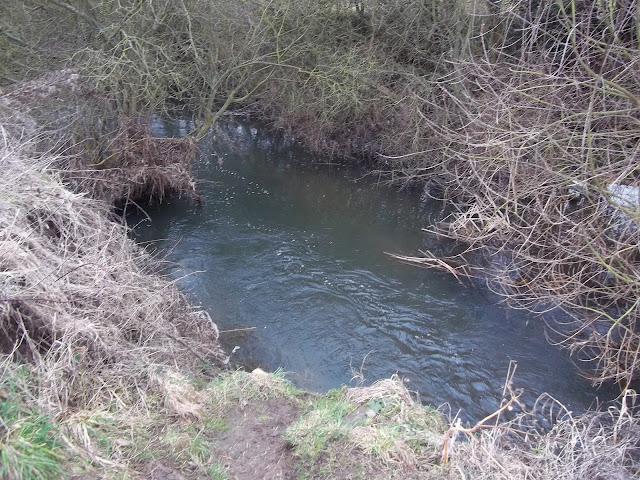 The first swim I happened upon was this glorious little channel cut out by the current. It falls in to a hole under the tree on the inside to the left of the picture . A large lump of cheese paste was caressed through the various bits of over hanging trees and foliage and fell gently in to the water. I lifted the bait to the surface on a taught line and the current pushed it towards the over hanging tree stump. When I was happy with its position the rod was lowered swiftly allowing the bait to drop down.

There had to be a fish under the tree it screamed chub!!. After several trembles the rod shot around and a very powerful fish was hooked  bending my rod in to a painful arch . The force of the current through the narrow swim was too much for my line and we parted company .....BUGGER!!!...
I left mentally disturbed but on leaving lumped in 5 more large dollops of my cheese paste .

As I mentioned I had not fished the stretch before and still have several other whole meadows left to explore  next season . I fished several other chubby looking swims on my way up and baited them for my way back down . The last swim resembled a huge deep looking vortex and comes with something of a reputation in the area . 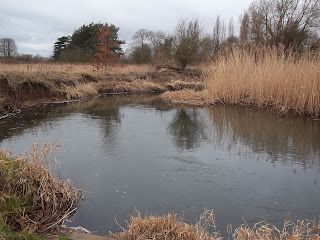 The swim took some working out as it is a huge eddy but on my third drop in I managed a chub of 3lb 2oz . A different approach will be used next time on this swim but it served its purpose for today and gave me a fish . I would of liked another try on the swim but my peace was some what disturbed by a soaking wet greyhound .He was hell bent on getting my cheese paste!!  Then the irate dog owner sky lining the swim whilst chastising the dog and apologising to me profusely sort of finished me off ....It was funny though ,if a little shocking . One minute I was watching the rod tip, then next wet greyhound ,arms, legs and a brawl over a bag of cheese paste ......pure comedy. 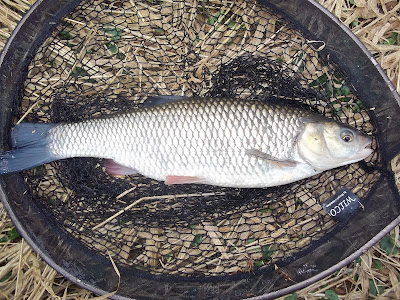 On the way back down I dropped back in to the hole where I started and exactly the same thing happened again. I only gave it one go as I felt the tackle I had, may of been a bit soft for the job . Hopefully I will have time to get up there for a few hours with a pokier out fit soon.


As always thanks for listening .