Sunday 28th March 2010
After a hectic few days at work and home I managed to get down to the pool for a few hours.
I fished on the point opposite the disabled bay as I have been introducing some bait around this and other areas.To cut a long story short it was an uneventful afternoon .However I did have a lead around a found some gravel areas and several under water obstructions which have a possibility to hold fish.
There were a few other anglers down at the pool and I was informed of fish showing this morning over the track down the middle well out of my casting range (at the moment!!!).Also it seems that every one that I speak to is putting in bait so the fish are getting well looked after .I made a choice to buy top quality fresh boilies that are very good for the carp and easily digestable all year round.
Any way all the best for now and Dan if your reading this hope you are recovering well .We haven't met yet but I read your posts.
Barry Peck
Posted by Bazal peck at 07:29 No comments: 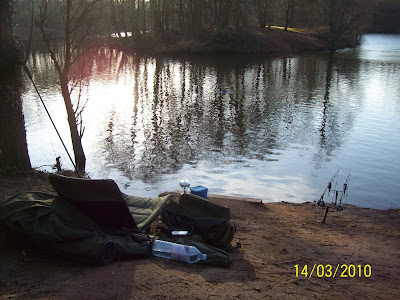 As my mother wass away on Holiday I had a free pass to get back up the pool AGAIN!!!!.

I awoke at 4:ooam to watch the boxing and was out of the house by 6:00am .The wind was pushin g across again so i opted to fish the back of it and dropped on to the point peg to fish the water in front of the island .

Alas the day was an uneventful one and I found it hard to settle and fish well so left at 1:00pm for beef and yorkshire pudding .......who could blame me.
Posted by Bazal peck at 10:21 No comments:

I arrived at the pool to find it flat calm and with the sun rising in to a blue sky i thought it would be as good a time as any to try fishing in to the bay across to the disabled platform.

I set the rods both with chod rigs .One with an 18mm cork ball pop up which was made with the same base mix as the bait i have been trickling in over the past 2 weeks .This was cast into the area in front of the platform.The second rod was again a chod rig and was fished with a smaller bright yellow pop up.This was punched across the bay intent for the tree line .

After 2 hours the cloud began to thicken up and a strong north westerly began smahing in to my peg.The temperature began to fall so i upped sticks and moved around to the point by the island or (terrapin isalnd) as I know it hahaha.I dropped in to peg 6 and began to cast around occasionally covering the area of water in front of me .

At 3:00pm I received a slow continuous run on my right hand rod .After a spirited fight i slipped the net under a 4lb+ tench .It was most welcome on a cold day and looking at my hook hold in its bottom lip I was filled with confidence that my rig was fishing correctly.

I left around 5:00pm as the sky darkened and the wind grew ever stronger.The day was my first on the pool and i left happy to of had a run in what were adverse weather conditions.
Posted by Bazal peck at 10:05 No comments: 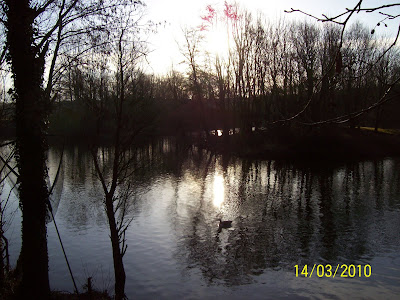 After a some what exploratory year on Ryton pool last year .I have now fallen in love with this moody and some times unearthly piece of water .

This year I endeavour to push on with my angling exploits on the pool and am going to keep things as simple and as practical as possible.Being an avid reader and researcher of carp fishing tactics ,bait and behaviour i do some times tend to chop and change my approach too much .

Having fished ryton pool last year with some small battles won I learnt that good watercraft and basic rigs were just as effective as any state of the art rig.

The start of my season on Ryton has been some what hampered by my daughters love of horse riding and my partners love of the allotment (i just do the digging and driving!!!!).How ever I have been spending a lot of time on the pool introducing small amounts of bait to certain areas and looking for signs of fish and wild fowl activity .

Hopefully with this "ere" blog I can learn something myself or assist others with their pursuit of the species .

Barry
Posted by Bazal peck at 11:25 No comments: