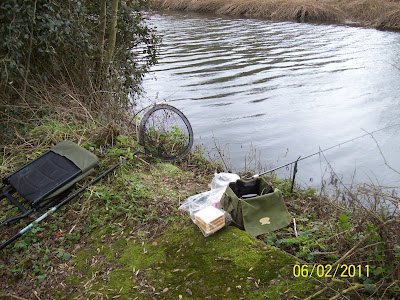 As I said yesterday I had found a swim fairly out of the wind and was being plagued by bites that I just couldn't hit.When I did connect I caught 2 roach and felt that there may of been a fair few fish down the end of the swim.

I vowed to return today with the plan of fishing a float down to the tree where the bites were occuring.Looking out of the window this morning I really didnt fancy it .Of all the elements ,I just cannot abide fishing in the grip of gale force winds .Wind hampers presentation ,comfort and is also dangerous to anglers that are usually with in killing distance of a tree.

I turned on the work mobile and checked my in box but by 9:00am nothing had arisen and the day was mine.I grabbed my pre prepared gear and liquidised bread and headed down to Baileys for a couple of pints of maggots .Once purchased I added a capfull of solar sweetener to the maggots as I beleive that sweet flavours appeal to roach (I said I believe I don't know for a fact).

On arrival at the car park it felt that the wind was stronger than yesterday and mixed in with it was a light hint of precipitation, GREAT!!! wind and rain the death knell of any good Roach session.I gathered the gear and trudged off across the car park and round over the bridge in to the wooded riverside.As I ventured up along the stretch I spoke to an elderly gentleman who was endeavouring to run a waggler through his swim .He informed me that he was having a bite a chuck and catching some nice sized dace.I exchanged pleasentary's and bid him good day. Then I continued my walk to the roach haunt.Now though I was some what lifted with the knowledge that fish were in the area and feeding.

I arrived at the swim and settled down on the natural seat created by a wall of some description dating back to god knows when.The swim is ideal and even offered some relief from the incessant marauding gusts.I set up my 13/15ft ron thompson float rod and a small reel containing 2.6lb drennan float fish line .The float was to be a 4BB wire stem stick.A wire stem is usuall only appropriate in fast paced water I know but my theory was to use a float that would cut its way through the upstream wind and offer stability at the same time .The oval body also had a shoulder on it that would help to stabilise the float .I undershotted the float as well to give it extra buoyancy amongst the white horses of the now very lively Warwichshire Avon .

I plumbed up at a comfortable 7 feet and fished on depth.After the preperation was finished I introduced 2 golf balls of liquidised bread and followed it up with a generous sprinkle of sweet bronze maggots.The first few runs through were uneventful and the presentation wasn't great with the float being battered but standing firm and unrelenting .

At around the 5 th run through I let the float trot to the exact spot where I had been dropping my feeder the day before and it bobbed then buried .A fish was hooked and amongst the rippled surface I spotted the lovely blue silver flank of my first roach of the day.The next trot produced exactly the same ,not huge fish but every single run through I was hooking roach of a similar stamp occassionaly a better fish of around 5-6ozs was landed .

I went on to catch around 30-40 roach like peas in a pod and had a really enjoyable couple of hours (I wished i'd had a keep net for the money shot!!!)The wind however got the better of me and beagn to swirl wildly from all angles towards the end which really hampered my presentation.I will return to this swim before the river season ends as I think that with more delicate angling and some alternative baits it may offer a better roach for my challenge tally.

I am now naming this swim the "Roach Throne"!! in honour of its regal nature and the many treasures that reside in the waters beneath it.

Until next time gents .