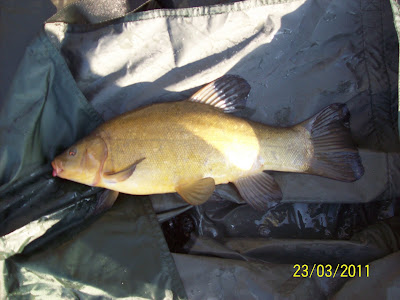 2lb 14oz of spring tench!!!
Once again today I ventured back to see the mistress.Having been busy at the early part of the week I new there was a lul in work imminent and prayed last night that it would coincide with the predicted warm spring day that was forecast.

Last night I prepared the tackle and bait and had it all ready in the front room.The morning was spent around the house doing various bits of house work. I call it " preparing the case for the defence" thus legitamising my time spent idley by the pool, when really I could of been doing some form of work!!.

11 o'clock came and my work phone lay pleasantly quiet ,so I loaded up the car and headed out through the Warwickshire countryside .The weather was amazing and I had the windows of the car down so as to absorb the maximum aroma that nature had to offer me after what seemed and always does seem a cold suffocating Winter.I arrived at the pool and was the only angler lucky enough to be free of the shackles of work on such a beautiful day .The pool was empty and I scanned the waters surface for signs of anything fishy .I opted to go around to the beach on the far side of the pool away from public and well and truly in to the warming rays of sun .

My plan was to fish both rods on solid pva bags and rove them around the bay .There were signs of fish all day and at one point a group of small commons bustled their way across the swim warming their backs in the sun.

After several very comfortable hours one of the rods was away and I hooked in to what felt like a tench .It zigged and zagged around the swim and gave a very spirited account of its self,unfortunatley the hook pulled and I cursed for all of a second .Never mind bag reloaded and punched out to the bay I leant back to enjoy the pleasant warmth of the day.

It was a day that made you feel truly lucky to be alive. And one that you should grasp with both hands in case of the return of cold weather and low temperatures.As well as seeing several buzzards over head I was amazed to see a red kite circle low over the pond .I have never seen them in Warwickshire before and so felt priviledged to do so .As well as the renewed abundance of wildlife the was also a renewed abundance of lady joggers and summery clad ladies present today .As I admired from a far one particular young lady in a short denim skirt the alarm burst in to life .After a careful fight I was pleased to slip my huge net under a small tench .Another species for the challenge and the perfect end to a wonderful day .I packed up prematurely really and made it home in time to feed the cat put the tea on and retrieve a full line of dry washing .

As I left a very large carp smshed out on to the surface along the no fishing margin of the bay .I could clearly see it was a huge common and was probably also feeling alive again after the clostrophobic cold of winter.

Two sessions ,two runs ,one fish that is the best start I have ever had on Ryton and in March as well.

Across the bay (no dogs allowed) 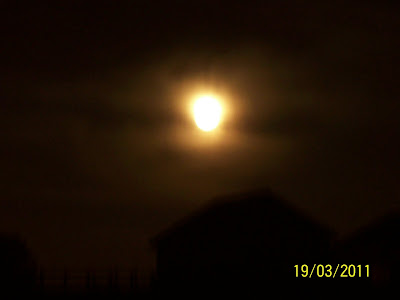 The super moon arrived Saturday night and my other half set about burning sage and various other bizarre things which included me drinking half a glass of spring water that was left out all night shrowded in bits and pieces to attract the moonlight .The moral of the story is "I will try anything once except morris dancing and incest!!" .If it could improve my catch rate it must be worth a try.

My plan for Sunday morning was to head back to the old mistress (ryton park pool).I had been visiting it more and more and as the weather is getting better there are some signs of fish moving.This was compounded on Saturday evening when I saw an angler net a tench.

Full of moon beams I set about getting another carp campaign off the ground .I am trying to stick to two approaches early doors so as not to confuse myself.Out went a chod rig and a solid pva bag .Both cast a fair distance in to the shallow bay area.

To cut a long story short apart from the odd liner the day was fish less much as I expected .However during the morning I was amazed to see at around 60yards out over my bait ,not a carp not a tench but a rhodesian ridge back !!!!!!

The dog was in hot pursuit of the resident phsycotic swan and I watched in awe as he swam and swam after it .Indeeed I even sat back and lit the stove up and made a cup of tea as it continued in its quest.The owner was no where to be seen and the dog had now virtually reached the island which is some distance from the disabled corner where its mission began.The swan which in years gone by had been such a dominant and indeed merciless character now looked bothered.Occasionally the swan would stop and hiss ,but the dog did not flinch .I poured my tea and awaited the arrival of the owner and eventually the shout of "bo bo"! went out. All be it half heartedly .After several more shrieks the dog turned from the front of the isalnd and began to head back towards the sanctuary of my beachy swim .

I was now looking at the dog head on as it majestically swam across the pond like a canine torpedo .Its teeth glinted in the morning sun .The owners calls now became more frequent and high pitched which in turn seemed to stir the dog in to some sort of panic .It was now baring down on my beach and looking very dunkirkesque .The shear size of this creature became evident as it now scrambled in to the shallows staring deep in to my eyes .It was at this point the dog (an estimated 10stones in weight) with a head like an anvil ran towards me ."I broke wind at and froze to the spot!!!! ".At the last minute the dog veared left and up the hill away from me . 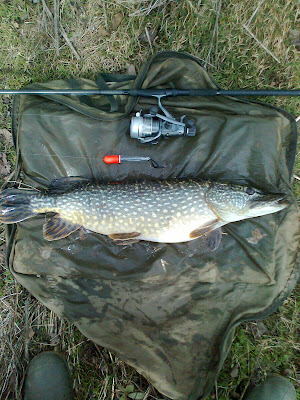 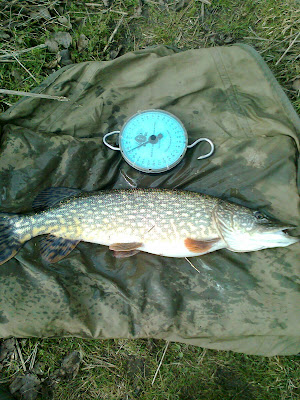 Just a quick line or two to announce that I after several attempts managed to catch my first pike by design today.

I popped down to a little fished part of the Warwickshire Avon and managed to catch not one but two pike in a morning session .It was an itch that needed scratching and it has managed to get me my new pb .The one with the scales in the picture went 9lb 8oz and the one with the float and rod in the picture went 14lb 2oz.Apologies for the piss poor photos but my camera packed up so I had to use my phone.

Also I can add another species to the chart.