An Old boy of the Avon. 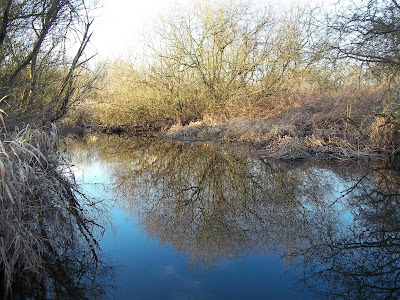 With swims like this to offer it was no wonder that after a short trip to Cheltenham I was making my way back to the upper Warwickshire Avon. Last night I had replenished my cheese paste freezer stock and purchased two small baguettes from Meriden Co Op . I made up my medium feeder rod with the light 2oz glass tip and this time opted to go with a lighter business end of 3lb 6oz Drennan double strength.  Having checked the Environment Agency river level site I could see that the river level was below par again after last week. I also opted for size 10 drennan specimen hook. The only weight on the line was a single SSG on a paternoster of fluro carbon.


My plan was to drop in to the end swim that I had caught from Saturday morning and try and put a fish on the bank. Once I had caught again I would be off up stream to pre bait some spots on the way . More importantly a fish in the net would give my confidence a boost as well.

Arriving in the swim the river looked painfully clear and there was very little flow .The Sun was bright and as high in the sky as a Winter sun can get which made me slightly apprehensive. Also the river was like a sheet of glass. The swim offered a lot of bankside cover and the water was out of the suns glare. I attached a small piece of the crust from the bread hooking it through the tough outer skin so that the flake side would be exposed to the water. On to the remaining length of the hooks shank I wrapped a small piece of cheese paste and molded it to the bread crust forming a bread cheese pyramid  .

My confidence was low due to the condition of the river but I intended to fish and sit on the bait for at least half an hour before making my way upstream. The bait was cast down stream  tight to the near margin and I sat back to take in the glory of the still winters day. It seems that the old dead tree in the meadow opposite is the haunt of a pair of buzzards.  I listened again to them calling to one another as one flew whilst the other perched in the withered branches of the trees corpse.

The rod tip gave the smallest of movements that could of so easily been a dace or minnow or even loose leaf cascading downstream. The movement was enough to get my adrenaline surging though and I sat forward clasping the rod with concentrated menace . Again the rod rattled, this time very chub like . Then it went around in a series of pulls and I lifted in to the fish . All hell broke loose and the creature charged in to the reed bed down the swim forcing me to give line or risk breaking the fine nylon. I turned it and drew the fish upstream watching in the clear water as a reasonable chub twisted and turned under the rod tip intent on ridding itself of my hook . Eventually she gave in and was drawn in to the net .

Camera, scales and return upstream, in that order. 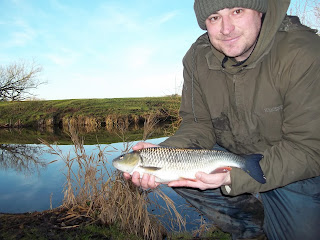 2lb 15oz and I'm chuffed with my cheese paste.

After returning the fish I decided to have one more cast . Last week I managed two fish in short succession.
The bait and casting ritual was performed again with the offering dropping in close to the margin a good distance down stream. I was elated at catching a fish within five minutes of settling down and decided to quickly text my long suffering partner who was at work . I new she would be as pleased as punch that I was sat by the river as she chored  away (NOT). As I completed the text the rod shot away again . My expectation  of a bite so quickly was very small and so I mistimed   the strike and the fish was gone with out even a hint of contact being made.

The phone was placed in to a pocket and out of harms way not to be seen again  until home time!!!!
As I always do in this situation I recast a fresh bait . My theory is that if the fish got away with the bait then they may of not been spooked so it can be worth a gamble just in case one is still present. Out went the bait rod in the rest and my full attention focused on the rod's tip .

After some five minutes or more the rod pulled around stopped and then pulled again . I struck setting the hook . A slow heavy weight moved across the river down stream and I dropped the rod low to the water so that it bent in to a fighting arc. The fish came to the surface and a large boil appeared followed by bow waves making for the far bank. This was a better fish and I turned it to mid river only for it to bore deep down and thud under the rod . The fish felt heavy and slowly but surely I gained line until I caught sight of its latticed broad back . HOLY SHIT !!! I declared . This was a good fish and a proper warrior eye balling me defiantly through the clear water . Please don't come off was muttered and the fish wallowed in to my net .

As I pulled the net towards me I could feel its weight and peeling back the mesh I was astonished as it lay their. A proper old school battle scarred Avon chub. Placing her in to the carrier bag I was convinced that it was my five. The needle flew around to the 5lb mark and then settled at 4lb 13oz just 2oz's and 8 drams off my personal best. 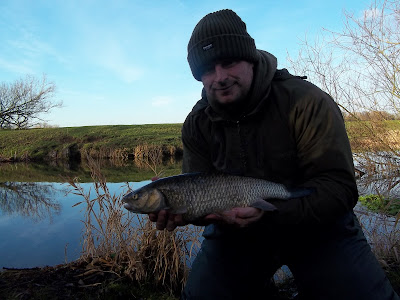 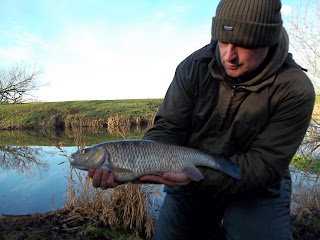 I went on to fish seven more swims today and didn't get another touch right up to dark and to  be honest I didn't care a bit . As the sun dropped the birds began to gather over the flats of the fields and I was treated to a fabulous display by a huge group of lapwings . Canada geese flew noisily over head and were illuminated by the reds and oranges of the setting winter sun against the purples and baby blues of the sky.

The quest for the five continues and I'm very glad too as I get to do and see all this again another day.